Are These the Best Dumpling Spots in the Bay Area?

Are These the Best Dumpling Spots in the Bay Area?

Dumplings! We know them, we love them and we all have our favorite spots for them. What constitutes a dumpling, you ask?

Dumpling (n.): a rounded mass of steamed and seasoned dough, often served in soup or with stewed meat.

Many cultures have their own types of dumplings. According to Wikipedia, even ravioli and tortellini fit the basic definition of a dumpling — David Chang even covered this revelation in his show, Ugly Delicious!

When Bay Area Bites tackled the topic of dumplings in the Bay Area before, it was mostly the Chinese version of them. We tried them in the East Bay (Oakland and Berkeley), in San Francisco and south of San Francisco.

We’ve even shown you how to make them at home — this recipe is pretty timeless and is great eaten by itself or in hot pot. And yes, as many of you stated, mom’s homemade dumplings will always be the best, but when you’re far from home or there are no ingredients on hand to make some, it’s good to have a place in your back pocket.

We recently asked you, the KQED community, to share their favorite dumpling spots, and we’ve compiled the submissions into this handy list for you! Most of the comments suggested Chinese restaurants, but shout-out to the Pushkin and Mama Papa Lithuanian lovers out there.

As always, our guides are by no means exhaustive, so, if we’re missing a dumpling eatery that people should try, let us know on Facebook, Twitter or Instagram. 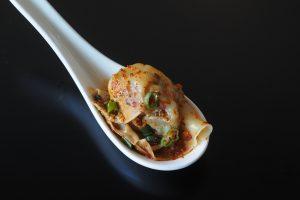