In fine dining, soup is the ultimate humblebrag

In fine dining, soup is the ultimate humblebrag

The first chapter of “Les Dons de Comus, ou L’Art de la Cuisine” is all about stock. Penned by François Marin in 1739, the book breaks down all that was essential to mastering French cuisine, according to a chef favored by the royal court. Marin writes that bouillon is “the soul of the cuisine,” the foundation upon which all else rests — including, but not limited to, the sauce that eventually elevates a dish. It’s easy to forget, in this age of stunt foods and gold leaf, that something so simple as a cup of clarified stock can speak volumes about a restaurant’s values.

Chefs know that despite (or because of) its surface simplicity, a bouillon or soup course in a tasting menu is an opportunity to really show off. At Benu, a soup made from winter melon envelops fresh silken tofu cut to look like a chrysanthemum. The carefully cut, feathery “petals” sway lazily in the liquid like the tentacles of a sea anemone. It’s a delicate course: a palate cleanser that did double duty as a demonstration of the kitchen’s superior training.

The chefs at Lazy Bear are more transparent about the work behind their halibut bouillon, which was poured tableside over an arrangement of winter purslane leaves and other wild greens during a May dinner. In Lazy Bear fashion, they explained their gill-to-tail philosophy to the dining room. When stripped of its flesh, each halibut carcass is roasted, then simmered in water to make the sticky, deeply savory broth.

With enough effort, broth can be the most unexpectedly satisfying “bite” of the whole meal, as it was at a recent meal at Atelier Crenn. An early course of spot prawn tartare was paired with a cup of cinnamon-colored stock made from the prawns’ shells, tomato and ginger. The tomato especially heightened the natural sweetness of the prawns. The pure-strain shellfish flavor was so intense as to completely block out everything else. It was overwhelming, but not grotesquely overdone, akin to entering an isolation chamber and only hearing your own thoughts. But in this case, the sole thought that crashed into me like a pink wave was, “PRAWN!”

At Californios, Val Cantu’s clarified lamb caldo, served with slivers of serrano pepper, served as a prelude to a hearty, chile-rubbed lamb rib course. In a way, it worked like the unadorned core melody of a fugue: something you can appreciate more when the performers layer more flourishes on top.

On the other hand, a prawn consomme that I encountered at Chef’s Table at Merchant Roots had more bells and whistles attached. I received an hourglass and a glass goblet in which a prawn’s raw, peeled body was connected to a crawfish’s head, much like P.T. Barnum’s alleged half-monkey mermaid. Once the consomme was poured into the goblet, the table was asked to flip our hourglasses so that the prawn meat could poach in the hot liquid. Here, the consomme was made to be an active participant in the overall spectacle of the meal.

At Eight Tables, the soup course was just as bombastic. The upside-down sizzling rice soup mimics the version you’d find at San Tung and Tsing Tao Chinese Restaurant, though with a lobster consomme and a spoonful of butter-poached lobster meat on top of the rice cake. Made to inspire oohs and ahhs, the dish is the spiritual cousin of the Tex-Mex fajita served on a hot cast iron skillet. Chef-owner George Chen’s version engages with that concept without irony; instead, the dish reflects his sincere appreciation for luxury and flash. 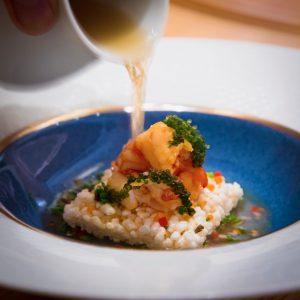 Far from being a trend, the presence of a beautifully clarified stock on fine dining menus speaks to how well the dish functions as a test of a kitchen’s skill and an indicator of the chef’s personality. The same holds true for more casual restaurants, which is why it’s so easy to suss out the quality of a Vietnamese place based on its pho. Though it may just look like dark water at times, a simple cup of consomme or broth is probably one of the most important tastes you’ll experience at a restaurant. – San Francisco Chronicle (09.02.19)