The magic that George Chen conjures inside his food emporium begins each morning on the streets of Chinatown. 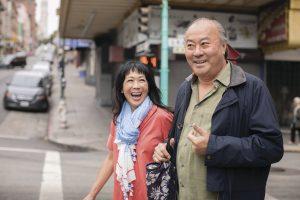 At 9:30am, Chinatown merchants are bustling. Bright fruits and obscure vegetables, such as celtuce, dragon fruit, sinqua and opo are on full display in storefronts, as shoppers clamor to get the best picks of the morning offerings. Fans of the popular China Live restaurant may be surprised to learn that this is where many mornings begin for George Chen. Surprised, because the amply staffed, nearly 30,000-square-foot celebration of elevated Chinese cuisine hardly seems like a place where each piece of produce is handselected by its owner.

But this magic that Chen has conjured inside China Live’s walls begins in the streets surrounding it. From its thoroughfares to its narrow walkways, Chinatown serves as a treasure hunt for Chen, joined many times by his wife, Cindy Wong-Chen, who grows her own herbs and vegetables at their farm in Petaluma and in their home garden. Chen seeks to revolutionize the way people see Chinese food, without abandoning the flavors that people have come to love. This is reflected in his dishes (”Have you ever seen broccoli beef made with filet mignon at a Chinese restaurant before?” Chen asks), organic produce selected from local farms and, of course, Chinatown. This is where ingredients, familiar and unfamiliar, inspire each day’s menu. Much like a jazz player, Chen has a firm grasp of his genre, he just doesn’t know what notes he’ll play on any given day. He never does. That’s what makes it exciting—and where the adventure begins.

9:35am
George Chen goes over the previous day’s menu at China Live before heading out to see what produce, meats and other ingredients he may discover in Chinatown that will inspire new additions to this day’s lunch and dinner menus. On the table are herbs and vegetables picked earlier in the morning by his wife, Cindy Wong-Chen, from her Petaluma garden.

9:45am
The couple’s first stop is at the ABC Supermarket Inc. market, located directly across the street from China Live, where Chen regularly checks on new produce. The owner is excited when she spots the couple and immediately heads to the back of the store, returning with a box of bright green stalks of celtuce. Chen pinches off a piece and hands it to Wong-Chen for tasting. “You always have to taste what it’s like raw to determine the quality,” says Chen. Wong-Chen nods, tastes and approves. She is well versed in spotting quality produce. She grows a diverse mix of vegetables herself, is continuously experimenting with her herbs to create teas and tinctures, and harvests her own honey. Several products in China Live’s retail shop are a result of these skills. 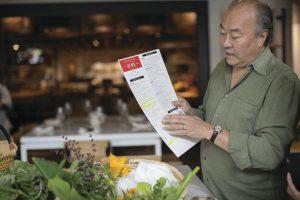 The menu at China Live changes daily, based on what local, seasonal ingredients are available.

10:05am
Chinatown is filled with longtime businesses—many run by people Chen knows. “There’s Buddha Bar,” he says, pointing. “It’s been here forever. And this business here has delicious Chinese pastries, but they’re always away on vacation,” he says, pointing to a sign that says “Closed, on vacation.”

10:15am
Chen quickly ducks into The Wok Shopon Grant Street to see if the owner, Tane Shan, is around. This, Chen says, is the best place to buy quality woks and where many of the woks in his kitchen were purchased. “They’re pre-seasoned!” he says, inspecting one of the many polished pans hanging from the ceiling.

10:21am
Mow Lee Shing Kee & Co. on Commercial Street is lined with pale gray bins containing meats and Chinese sausages. Chen and Wong-Chen go through the meats, bringing them close to their noses to sniff out the layered flavors. This is one of the oldest businesses in Chinatown, opening in 1856: “Before the Civil War, before California became a state, before the signing of the Chinese Exclusion Act, before the advent of refrigeration, Mow Lee began making Cantonese-style preserved meats in Chinatown,” according to the shop’s website. Chen uses the Chinese sausages from here in various dishes at China Live.

10:26am
A variety of packaged tofu can be found inside Wo Chong Company on Washington Street—all of which was made in-house at the family-owned business that began producing tofu and bean sprouts in 1935. Chen explains how each texture suits different dishes at China Live, such as tofu lettuce cups, ma po tofu, and the Happy Family Tofu Special. “They do a really good job here,” he says.

10:44am
Inside Jing Ye Co. Inc. glass jars hold precious commodities. Seven pieces of dried, whole Japanese scallops cost $55. dried bird’s nest is priced at $650 for 250 grams (and a bargain $400 for broken bird’s nest). Here, you find a menagerie of dried products: seafood, such as sea cucumber, fish maw, abalone, among others; as well as herbs, mushrooms and teas. The prices reflect the lengthy process to prepare each item, many of which are rare and difficult to gather. Bird’s nest, for example, is made of bird saliva, which has dried and hardened. “Imagine how much bird saliva they had to collect to make this one little package,” says Chen about the Chinese delicacy that is often used in soups. Wong-Chen scans the dried scallops, which she says are packed with concentrated flavor from the drying process. “This is good in fried rice,” she says, buying a bag. 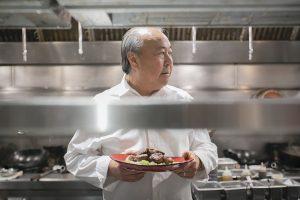 11:08am
Chen addresses his sous-chefs waiting in the kitchen to let them know what he’s come back with. They listen intently before springing into action. After changing into his chef’s jacket and picking up a cleaver, the jazz player begins to play. “Where’s my celtuce?” he asks, but, no matter, he’s already started playing the notes. He brings out a cut of filet mignon and instructs staff to start chopping onions, red peppers and lily pods. When the celtuce is delivered, he calls to one of the sous-chefs to show him the vegetable, demonstrating how he’d like them sliced.

11:26am
The improv dish is complete. Chen plates his new creation, carefully wiping the edges and repositioning the red peppers with a pair of chopsticks to distribute the colors evenly. He gives it a taste before inviting others to do the same, asking for their opinions. They respond with nods and looks of approval, offering their suggestions in Chinese. Chen decides to add it to the menu.

11:43am
Once the matter of China Live’s menu is settled, Chen heads upstairs to the Eight Tables kitchen. Here, the bustle and wild energy of downstairs is replaced with a calmer, cooler atmosphere. Visiting today is Michelle Roldan who delivers fresh produce from Greenleaf, a distributor that supports small-scale farms, promotes sustainably grown produce and brings the products to Bay Area chefs. Chen goes through the boxes: a mélange of dainty edible flowers, red peppers, pea sprouts, and an array of mushrooms, figs and baby bok choy. He is particularly interested in the batch of iceplant, a crunchy, salty succulent sprinkled with translucent bubbles that resemble frost. “Taste this,” he says, opening the package. “Isn’t that nice?”

11:49am
Much thought has been put into the dining experience for Eight Tables. The adventure begins with a separate entrance through a back alley leading to a metal gate. A simple “8” etched onto a bronze-colored plate hangs on a natural stone exterior in front of a secret elevator. The diner is brought up to an entryway lined with old sepia-toned portraits of both Chen and Wong-Chen’s families. While the kitchen staff unpacks and arranges the new shipment of produce, Chen walks through the dining area to make sure everything is in order for that evening’s dinner.

12:10pm
After inspecting the produce, Chen calls over to one of the Eight Tables chefs. Together, they start arranging the ingredients to prepare a vegetarian dish they plan to serve for dinner that evening. When it’s complete, Chen presents what looks more like a floral painting than a plate of food. Even he seems impressed by the dish, reaching for his cellphone to snap a shot of his creation.

12:30pm
Chen returns downstairs, bringing his new colorful dish with him. The lunch crowd has already begun filling up the restaurant, eating dishes that at one point all began with a day like this one. “I mean, who does something like this?” Chen laughs. “Someone crazy, I guess.” – San Francisco Magazine (10.29.19)