Throughout March, the Chinatown Kite Shop, China Live, Dragon Papa Dessert and Golden Gate Fortune Cookie Factory will set up shop within the Ferry Building where they will offer some of their most iconic goods. The Ferry Building hopes the pop-up will highlight each small business and remind locals to shop local.

Kevin Chan, the owner of the longstanding Golden Gate Fortune Cookie Factory, told SFGATE that “it’s an honor” to be part of the monthlong series. 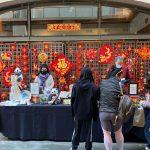 “It’s a great way to step out and promote,” Chan said. “We’re all collaborating and hopefully in a few more months we’ll get through this.”

Chan said that since the March shutdown nearly a year ago, business at Golden Gate Fortune Cookie Factory has dropped by 80% as tourism has faded. General foot traffic around Chinatown has likewise dipped. “It’s like a ghost town, but we still continue to survive,” Chan said.

One of the main goals for the pop-up series is to support businesses around Chinatown that have particularly struggled to remain afloat during the coronavirus pandemic. In January, SFGATE reported that Chinatown businesses lost an average of 70% of revenue and that “between 50-75% of businesses were vacant or closed along certain blocks of Grant Avenue — an area which was once a bustling tourist destination.”

Lin Wu, who is the property manager at the Ferry Building, reached out to Chinatown advocates Myron Lee and Lily Lo, who helped facilitate introductions with business owners and helped select Chinatown businesses for the pop-up series, a spokesperson told SFGATE.

Chan feels thankful to be chosen as one of the Chinatown businesses, especially after looking forward to a spike in sales during the 2021 Chinese New Year Parade that was ultimately canceled. Now, he’s excited to bring his legendary fortune cookies to the Ferry Building, including the flat ones that happen to be Chan’s best-selling item.

A portion of the sales made from the four businesses during the pop-up series will also go toward San Francisco Community Business Resources, a nonprofit organization that assists small businesses around the city. – San Francisco Chroncile (03.12.21)