Serial restaurateur and founder/chef of San Francisco’s China Live, George Chen knows a few things about challenges. Back in 2017, when Chen and wife/cofounder Cindy were preparing to open their sprawling, ambitious Chinese marketplace and dining hall, opinions ranged from the skeptical to the downright incredulous. A 30,000-square-foot shopping and dining complex, on Broadway? A luxurious, $20 million, multi-concept facility—in Chinatown?

Indeed, when it made its debut in March of that year, China Live was unlike anything the city had ever seen. It was certainly a departure for Chinatown, and the unlikely stretch of Broadway the Chens chose for their new flagship. But the couple knew precisely what they wanted to do. And since the project’s inception, they’ve steadily been doing it. China Live is now among San Francisco’s busiest restaurants, and its luxurious second-floor sibling Eight Tables has become a magnet for upscale diners and famous chefs alike.

Now, barely more than three years in, the Chens are facing perhaps the biggest challenge yet: reopening their massive operation in the new Post-Covid era. While the city still hasn’t determined any concrete dates for the return of in-house dining, sanctioned outdoor dining returns to San Francisco this Friday. And never one to procrastinate, George Chen has been preparing for the reopening practically since the lockdown began.

“I’ve been getting ready for a June opening for a while now,” Chen says. “I want to be the first out of the gate, and to do things right.” 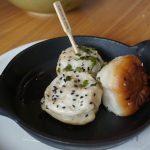 Although the restaurant has been doing a steady takeout and delivery business during the crisis, this will be their first time serving sit-down customers since March 17th. They plan on making sure their patrons are safe and comfortable–and being ahead of the game once in-house dining is allowed to resume.

First on the agenda: a redesign of the restaurant’s floor space. This is where China Live has a serious advantage over most eateries in the city. As one of San Francisco’s biggest restaurant spaces, they have an awful lot of room to work with.

They also have a very strong retail element, offering a wide selection of house-made sauces, premium cooking products and other culinary goods. From the beginning, China Live has worked to integrate that retail component, a crucial part of the overall concept, into its restaurant operation. And now that social distancing has gone from a guideline to an imperative, it may have become their saving grace. 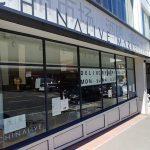 The paper is off the windows at China Live, a sign of their return to in-house service. | Photo: Joe Bonadio

“We’re rearranging our tables for distancing—it’s going to be dispersed. So instead of having your dinner next to another table, there will be a retail display there,” Chen says. “You’ve got your own table. You’ll feel like you’re in a real market hall.”

Many diners will be understandably nervous when they begin coming out again, and China Live plans to be proactive when it comes to their concerns. Before entering, every patron will have their temperature taken with a no-touch forehead thermometer. At the host station each customer will sign in and provide contact information for purposes of contact tracing, should it be required. Servers will be wearing gloves and masks at all times—and the restaurant’s open kitchen will help insure everyone is on their best behavior.

“The number one concern for people coming to the restaurant will be: Is it safe? They know the food is good,” Chen says with a shrug. “It’s China Live.” 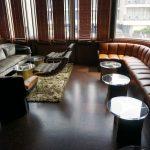 The Chens’ first hire when they opened China Live, Doug Collister’s business card reads Director of Marketing & IT. But his responsibilities are more far-reaching than that title suggests; he has been tasked with much of the technical transformation required for reopening.

“Obviously, we’re working to comply with all the state, county and city regulations regarding safety around Covid-19,” Collister says. “But we’re also evaluating our menus, and developing products to extend beyond our floor walls.

“We’re exploring pre-ordering….and people will be able to sit down and order online,” he explains. “So they’ll never have to touch a pen and paper, and there’s no exchange of money. It will all be done seamlessly.”

Collister emphasizes that when it comes to bringing back diners, the customer’s sense of safety will be all-important. “That’s going to be the new word-of-mouth,” he says. “You’re going to hear ‘I had the safest experience—It was great!  Oh, and the food was amazing.’” 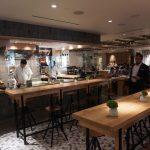 Meanwhile, George Chen has been paying close attention to other places affected by the virus. He understands everyone won’t come out at once, and intends to use the time wisely. “We are going to be ahead of the curve, and let people know it,” Chen says. “So when they do choose to go out, they’ll give us a try.

“And then word will get out,” he says. “The best advertising is when someone tells their friends: ‘Oh my God, China Live—I went there for dinner, and I felt so safe. Those guys had it down.’”

While the return to dine-in is a crucial step for restaurants, the expected limit to 25-50% of full capacity is expected to have a drastic effect on bottom lines. China Live is no exception, and they’ve moved to renegotiate their lease in an effort to somehow make the numbers work. They’ve received PPP funds, but haven’t determined how or when to use them. 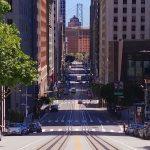 “We have until June 30th to return the funds without a penalty. It all depends upon the lease,” Chen explains. “If I don’t get a revised long-term lease, then I don’t need the PPP.”

And while Chen wouldn’t consider closing China Live, he also doesn’t feel tied to the location. “There are going to be a lot of spaces open,” he says.

As restaurants come back to life, they are going to look radically different. Many are already pivoting toward take-out and delivery, meal kits, e-commerce and things like specialty in-house products for home use. And happily for China Live, these changes dovetail nicely with the goals of their brand.

“We want to be the name people turn to when they think of Chinese and Asian food,” adds Cindy Chen. “A place where you can come and shop, and have a bite and take a few special things home.”