China Live Doubles Down on Delivery, Will Drop Its Sheng Jian Bao All Over the Bay Area

China Live Doubles Down on Delivery, Will Drop Its Sheng Jian Bao All Over the Bay Area

The popular Chinatown restaurant will soon operate out of 10 ghost kitchens — in Berkeley, San Jose, Palo Alto, and beyond

China Live, George Chen’s $20 million multi-venue Chinatown food emporium, has muddled through this pandemic as best as it could: Its first-floor Market Restaurant has stayed open for takeout the entire time, and, a couple of weeks ago, the restaurant started serving diners on the sidewalk for the very first time. But none of that feels adequate to safeguard the 30,000 square-foot restaurant’s long- and medium-term future, Chen says.

And so, China Live is doubling down on the one service Chen feels confident that diners are going to want in the coming year: delivery. Specifically, the restaurant is launching a new ghost kitchen venture this week called China Live Signatures, offering a limited menu of customer favorites for delivery — not out of its own kitchen (which will continue its own takeout and delivery offerings), but from 10 virtual kitchens spread across the Bay Area. The new initiative will launch on Tuesday, July 14, at just one location — in SF’s Financial District. If all goes well, within the next two weeks, customers throughout much of the Bay Area — in Berkeley, San Jose, Palo Alto, and beyond — will be able to order China Live’s Dongbei-style long potstickers and its juicy, crisp-bottomed sheng jian bao for delivery to their home.

“Now the world has changed,” Chen says. “If people aren’t traveling and want to stay home more, we’re going to have to get to them.”

The new project is a collaboration with Virtual Kitchen Co., a San Francisco-based ghost kitchen company started by a couple of former Uber execs back in November with $17 million in venture capital funding. In some cases, virtual kitchens — where food is sold on a delivery basis, only — function as a way for a restaurant to sell a new, separately branded line of products out of its existing kitchen. Square Pie Guys’ new fried chicken sandwich delivery business, Hetchy’s Hots, for instance, shares a location with its sister restaurant.

Virtual Kitchen Co., on the other hand, has focused on extending the geographic reach of larger brands, allowing them to deliver their food to a wider audience — Dosa, the upscale South Indian chain, being the most prominent previous example.

That’s also the plan with China Live, which, as Chen explains, previously couldn’t even deliver to all of San Francisco through various third-party apps — only one of them would deliver as far west as the Richmond District, Chen says. With planned sites in Berkeley, Belmont, Daly City, Palo Alto, and Sunnyvale, as well as in a handful of San Francisco neighborhoods, the virtual kitchen outposts will allow the restaurant to reach a much wider swath of the region. There won’t be a separate ordering platform — instead, customers will simply find a new option to order from “China Live Signatures” on those third-party delivery apps. 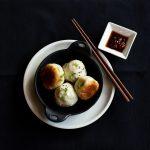 According to Chen, the menu is meant to be a kind of greatest hits of China Live’s more takeout-friendly dishes, with the sheng jian bao — the pan-fried pork buns that are easily the restaurant’s most popular item — as the headliner. Also available: the restaurant’s Dongbei-style long potstickers, Sichuan-style “working hands” wontons, slow-roasted pork char siu, baked char siu buns, Dungeness crab spring rolls, lo mein, and Yangchow fried rice. Humphry Slocombe ice cream, sold by the pint, will also be available. Prices will be the same — or, in a few locations, very slightly higher — as if customers ordered the corresponding item directly from China Live.

One of the challenges of the ghost kitchen approach is that the food will be prepared offsite by non China Live staff without access to all of the restaurant’s specialized equipment — woks, for instance, or the special wood-lidded pan it uses to cook its sheng jian bao, for instance. That said, some part of the initial prep process for all the dishes will take place at China Live proper, which means that if the volume of sales is anything like what Chen is hoping for, the program will also allow the restaurant to hire back more of its laid-off staff. The restaurant has gone from a staff of more than 200 to, in the early days of the pandemic, a skeleton crew of around 20 employees. At present, that number has grown to 60 or 70 staffers, Chen says. If the delivery-only operation goes well, and indoor dining relaunches — whenever that happens — Chen could see himself rehiring another 20 or so workers.

Still, Chen says, it’s clear that things won’t go back to “normal” for quite some time. According to Chen, the project stemmed, in part, from internal data that indicated that roughly 70 percent of China Live’s customers travel more than 9.7 miles to dine at the restaurant — a sign, Chen explains, that it isn’t a restaurant that can sustain itself on locals, alone. Even when dine-in service starts again in San Francisco, Chen doesn’t anticipate large numbers of customers coming out to eat on a regular basis. “You can’t just sit and hope everyone’s going to go back to 2019,” he says.

That’s why Chen says he’s pivoting to new initiatives like ghost kitchens and, when indoor dining starts again, turning his dining room into more of a hybrid marketplace, with servers tasked with selling retail goods like packaged sauces and meal kits in addition to waiting tables. One of the ironies of this pandemic, of course, is that it has turned ghost kitchens — a tech innovation that had largely been viewed with suspicion — into a savior for some.

Chen, for his part, has mixed feelings: “I’ll feel good about it if the geographic distribution brings back the revenue I lost,” he says, laughing. – Eater San Francisco (07.13.20)