At China Live in San Francisco’s Chinatown, George Chen and his team offer a seasonally rotating menu drawn from regions across China. To match his diverse influences, Chen maintains enough top-tier equipment to fill multiple restaurants, including stations dedicated to steaming, frying, grilling and roasting. One of his most versatile assets, however, is a line of heavy-duty wok burners.

Woks perform differently than other cookware almost exclusively because of their shape. Flat-bottom pans offer consistent, static slabs of heat on which food can rest, punctuated by intermittent bouts of tossing or stirring. Woks are dynamic — the curved bowl facilitates constant movement when food is tossed or stirred. This allows small pieces of food to dance across glowing-hot cast iron without pausing long enough to become burnt lumps of carbon.

The extreme slope inside a wok also facilitates a delicious flirtation with disaster known as “wok hei.” Wok hei refers to the flavor generated by wok-tossing food in a circular motion over a high-powered flame burner. This technique flings oil droplets above the edge of a wok to briefly kiss the flames that wrap around the bowl before falling back to safety in the center of the pan. Translated into English, wok hei means “the breath of the wok.”

Casual foodies often attribute magical powers to woks in the same way that they deify cast-iron frying pans. Online debates rage about the virtues of cast iron woks — preferred by Chen and his cooks — versus carbon steel or aluminum. Devotees of each type claim that their favorite is intrinsically superior and guarantees better results. Woks can do spectacular things, but without skilled hands and the right burner, any wok-prepared stir-fry would be hard to distinguish from the same meal prepared in a saute pan.

A skilled cook can vary the amount of heat, oil and water added to a wok to combine the benefits of multiple culinary techniques in a single piece of cookware. Thin egg noodles are the cornerstone of China Live’s Hong Kong noodles, and they are the first ingredients to showcase a wok’s versatility with a shallow pan fry.

A raw noodle contains thousands of tiny starch granules, packets of crystallized carbohydrates that feel dry and gritty on the tongue. Transforming any noodle from brittle and starchy to chewy and slippery requires two steps: water and heat.

Dumping noodles into a pot of boiling water allows both steps to happen simultaneously and for each granule to absorb enough water to become tender and jiggly. But Chen achieves a unique texture with his noodles by taking an alternate route. Prior to dinner service, he gives fresh noodles a quick soak in cold water to pre-infuse each strand with moisture.

Once the moistened noodles have soaked up enough water to cook through, a chef adds them directly to a hot wok with a couple of ladlefuls of preheated oil. The hot oil coats the surface of the noodle, shepherding heat from the wok into every crevice. Water buried deep in the core of the noodles renders a perfect al dente texture, and water closer to the noodle’s surface flashes outward as bubbling steam, leaving behind a crispy layer of thin, puffed starch glass.

As soon as crisped noodles start to turn golden brown, the cook strains them from the hot oil with a wire spider and sets them aside.

Oil makes a good bucket brigade for passing heat to noodles and other food, but oil-based wok cookery doesn’t always hammer with quick heat. Chen’s cooks follow the high-temperature pan-fry of the noodles with a gentle oil poach of slender strips of chicken.

While oil can be heated to higher temperatures than water, heat travels more sluggishly through oil. Compared to water heated at the same temperature, oil passes heat into food at a gentler clip, perfect for coddling ingredients that overcook easily.

Chen’s cooks strain and then slightly cool the oil they used to pan-fry the noodles, adding it back to the wok with the burner on low — this maintains just enough heat to simmer the surface of the chicken to a velvety soft texture.

The oil also retains some of the aroma generated during the high-heat noodle fry, which gives the chicken the benefit of roasty, fried flavor without the downside of aggressive heat.

While the chicken receives its oily spa treatment, the cooks simultaneously splash bok choy into a pot of roiling water near the wok station.

For relatively large pieces of vegetables such as quartered heads of baby bok choy, blanching readies the softened flesh for a quick blast of searing heat when it eventually joins the other ingredients in the pan.

Smaller vegetable ingredients, however, can be seared and tenderized at the same time. 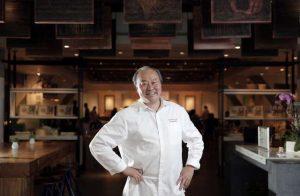 Chen’s crew prepares for this phase by cranking up the awesome thermal power that only commercial-strength wok burners can conjure. Once the wok is ripping hot, they throw thin petals of shaved ginger and mushrooms, ribbons of sliced bird’s eye chile and short batons of scallion along with a spoonful of oil into the inferno.

These ingredients basically ice skate across the surface of a cast-iron sun. Several layers of petrified oil, accumulated from hours of high-heat seasoning and countless wok hei-producing tosses, coat the wok to help minimize sticking. This allows the food to skitter and tumble on cushions of vaporized water, leaving a thin halo of blistered crust wherever it touches the pan. The puff of vapor redolent with aromatic essential oils that rises from the wok during this phase is called “bao xiang,” which heralds the layering phase of the process.

First, the noodles join the aromatic vegetables in the wok for a brief re-crisping. This helps their unique balance of glassy chewiness withstand the coming juicy onslaught of chicken and bok choy without becoming soggy.

After a handful of bean sprouts get a quick scalding in the mix, a shot of Chen’s house-made sauce follows. Made with dark, mushroom-infused soy sauce, light soy sauce, Shaoxing wine, tomato paste, sesame oil and white pepper — the sauce is loaded with enough protein and sugar napalm to become savory caramel in seconds.

This building phase culminates with a stream of sesame oil that rings the upper level of the wok. The oil splashes just below the lip where flames climb up the outside of the bowl, providing fuel for the grand finale, which is where wok hei finally comes to the forefront.

As soon as the combined ingredients receive their fatty benediction from the sesame oil, the cook begins tossing the ingredients continuously for several seconds. The shape of the wok acts like a halfpipe, angling the food so that it flies out above the lip of the vessel before safely falling back toward the center of the wok.

Each time the oil-laden ingredients breach the rim, they smash into a wave of burner flame that wraps around the smooth exterior of the wok. Tiny droplets of oil explode, generating sparks of Technicolor aroma confetti that are extinguished milliseconds later. It’s certainly possible to flip noodles in a saute pan, but angling oil-laced food toward a full flame in anything but a well-managed wok virtually guarantees that the pan will catch fire.

The flipping process continues, creating cyclical backflips that pull wave after wave of sparked aroma into the dish. This yields a flavor akin to that of traditional grilling, though less harsh, because the tossing motion allows each ingredient to briefly kiss the flames before adding its signature fragrance to the mix.

Like the deep smoke ring of a perfect barbecued brisket or the ethereal cornicione crust of an expertly made pizza, wok hei isn’t just poetic sentiment. It’s a badge of honor, a trophy for a job well done. – San Francisco Chronicle (01.22.20)