7 Local Dim Sum Dishes to Try
A look at a few iconic dishes and how local chefs are updating the Chinese tradition.

Dim sum. These two diminutive words can be literally translated to mean “touch of the heart,” but the culinary tradition is intricately connected to China’s teahouses, and “dim sum” is often expressed as “to drink tea.” Dim sum is said to have arrived in southern China, notably the province of Canton (now referred to as Guangdong), via northern China and the Silk Route, the ancient trade network that connected Asia and the Middle East with Europe. As early as 130 B.C., the Silk Route was dotted with rest stops where travelers paused to drink a cup of the locally grown and produced tea. Soon enough, food was served alongside and developed a distinct character, becoming a sought-after delicacy in its own right.

Dim sum’s resurgence makes sense for our time; the shareable petite portions are ideal for enjoying with family and friends. Though every cuisine seems to have a cute little dumpling in its canon — think empanadas, kofta, momo or ravioli — dumplings, closely associated with Guangdong and popular in Northern California, are just one form of dim sum. Here’s a look at a few iconic dishes and how local chefs are updating the dim sum tradition for today’s small plate dining scene. 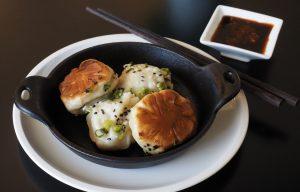 Sheng Jian Bao
Bao (or baozi) are a type of filled bun, and sheng jian bao (also known as SJB) are said to have originated in Shanghai around 1900. At S.F. Chinatown’s China Live, this hot seller is filled with minced Kurobuta pork, ginger and scallions, then folded with pliable soup broth. After a spin in a hot paella pan, the SJB’s crisp edge belies the hot soup inside, making this dish both crispy and impossibly juicy. – Marin Magazine (01.20.20)