Asian cuisine is showing its myriad influences at Eight Tables by George Chen in San Francisco, opened last fall, featuring Chinese shifan tsai, or “private chateau cuisine,” referring to the experience of dining at a private home with a banquet prepared by a highly respected chef, who uses the seasons as his guide to ingredients.

Located on the second floor of the $20 million China Live complex in Chinatown, Eight Tables is reached through a barely lighted back alley entrance, which seems to add to the mystery of what you will soon be experiencing. As you exit the elevator you are cordially greeted by a hostess in a room set with a wonderful 1950s style phonograph that plays old Shanghai jazz, then you enter into a series of eight rooms set for individual parties at beautifully polished tables with brass inlaid Lazy Susans. Photos of owner and executive chef George Chen’s family are hung on the walls above you. The service staff is dressed in beige Ralph Lauren suits. Even the chopsticks are embossed, one pair for right-handed guests, one for left-handed. It’s swank, all right, and has a shadowy cinematic cast.

Chen has always been in the forefront of authentic Chinese dining experiences in San Francisco, having started at Madame Cecilia Chang’s seminal restaurant, The Mandarin. On his own he opened Betelnut Peiju Wu, an innovative Asian beer house, which I deemed one of the Best New Restaurants of 1996. Chen then launched the multi-unit Long Life Noodle Company, and turned his focus on Shanghai cuisine at Shanghai 1930. Other concepts followed. So Eight Tables is a culmination of his career and his goal to give Chinese cuisine the same respect it has in China itself, adding a superb wine, sake and whiskey list to the mix, overseen by Anthony Kim. 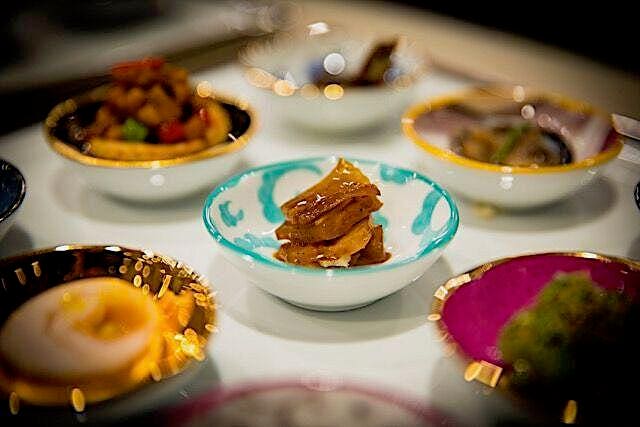 Dinner here is a $225 fixed price for about ten courses, with accompanying wines at $125 more.

I haven’t the space here to detail everything I had, so I will just say that the presentations are spectacular and Taiwanese chef Robin Lin’s ideas can be amazing without being extravagant. You begin with nine small dishes set on one serving plate, each jewel-like, and you’ll probably forget what the waiter tells you they are. But the principal ingredient becomes apparent as you pop the item into your mouth, which follow a sweet-and-sour and hot pattern.

I was a bit jetlagged the night I dined at Eight Tables, but that didn’t diminish my pleasure over the course of a two-and-a-half-hour meal. I was so constantly surprised and amazed by the presentation, the refinement and the flavors of what I ate that I left feeling elated and wondering what the next menu will be in the next season. – Forbes (04.05.18)